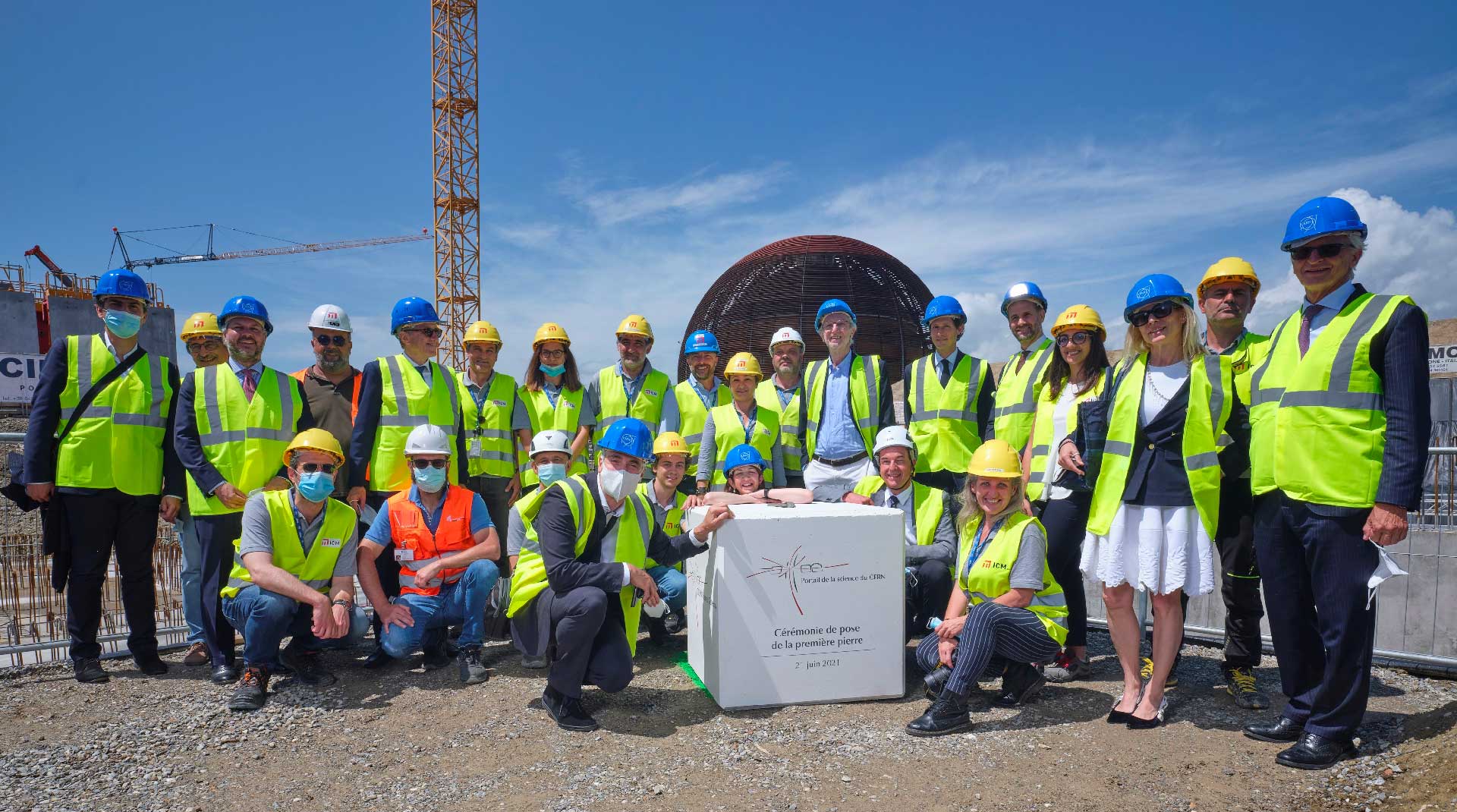 Amsterdam - CERN today, held a first stone ceremony, as the next step in the creation of the  Science Gateway, a new hub for scientific education and culture, which was first unveiled in 2019 in Geneva with the support of the FCA Foundation (the charitable arm of Stellantis).

Fabiola Gianotti, CERN’s Director-General, John Elkann, Chairman of Stellantis and the FCA Foundation, the main donor, Renzo Piano, architect and founder of Renzo Piano Building Workshop, and Antonio Hodgers, representing the Geneva Canton, were present to mark the successful start of its construction. Ursula Bassler, President of the CERN Council, contributed to the ceremony remotely.  Representatives from CERN Member and Associate Member States, Host States and many other partners were also in attendance at the ceremony.

“I would like to express my deepest gratitude to the many partners in our Member and Associate Member States and beyond who are making the CERN Science Gateway possible, in particular to our generous donors. The challenging times we’ve been through over the past 18 months have demonstrated the enduring value and the necessity of science and the need for cooperation across borders. Science brings people together and shows what humanity can achieve when we put our differences aside and focus on the common good. Science gives hope and trust in a better future. We want the CERN Science Gateway to inspire all those who come to visit with the beauty and the values of science,” said CERN Director-General Fabiola Gianotti during her opening speech.

With a footprint of 7,000 square meters, the iconic Science Gateway building will offer a variety of spaces and activities, from  exhibitions explaining the secrets of nature, to the very small (elementary particles), as well as to the very large (the structure and evolution of the universe). The exhibitions will also feature CERN's accelerators, experiments and computing, how scientists use them in their exploration and how CERN technologies benefit society. Hands-on experimentation will be a key ingredient in the Science Gateway's educational program, allowing visitors to experience first-hand what it is like to be a scientist. The immersive activities available in the Science Gateway will foster critical thinking, evidence-based assessment and use of the scientific method, important tools in all walks of life.

The project will be funded through external donations, with the leading contribution coming from Stellantis through its FCA Foundation.

“At Stellantis we strongly believe in the importance of education, with an emphasis in the fields of science and technology.” said John Elkann, Chairman of Stellantis and the FCA Foundation. “Supporting STEM education has proven to be the most effective way to keep our societies open and safe as we have learned this last year by overcoming the Covid-19 crisis.”

“Among the many education initiatives we are promoting in our communities, we’re honored to be supporting the ambitious and innovative Science Gateway project that is expected to raise awareness, curiosity and love for science in every dimension in the greatest number of people possible, from our children to our elderly. We are very proud of our association with CERN with whom we share similar values and optimism about the future” Elkann added. “This commitment in such a stimulating setting is also a way for us to honor the memory of Sergio Marchionne, with his multifaceted intellectual curiosity and his passion for physics, with its rigorous and evidence based methods and yet always open and creative.”

As part of the educational portfolio of the Science Gateway, CERN and Stellantis through the FCA Foundation will develop, with the advice of the Fondazione Agnelli, a project of education in inquiry-based physics dedicated to Italian middle schools.

Scheduled to open in 2023, the Science Gateway will be hosted in a new, iconic and carbon neutral building, designed by world-renowned architects Renzo Piano Building Workshop, on CERN's Meyrin site adjacent to other iconic buildings, the Globe of Science and Innovation.

“It is with joy and pride that we are launching today this ambitious project where, thanks to the collaboration of different skills, nationalities and languages, we will build a place of exchange and knowledge. A bridge, forever bridges! A glass bridge, which links the different themes and parts of Science Gateway while also allowing a physical encounter between researchers and children, visitors and physicists, tourists and scientists, all driven by curiosity and the thirst for knowledge,” said Renzo Piano, the internationally renowned architect, whose notable buildings include the Zentrum Paul Klee in Bern, the Pompidou Centre in Paris, and the Shard in London.

An exhibition on the Esplanade des Particules details the project and its connection to CERN.

The Renzo Piano Building Workshop (RPBW) was established in 1981 by Renzo Piano with offices in Genoa, Italy and Paris, France.

The practice permanently employs about 110 architects together with a further 30 support staff including 3D visualization artists, model makers, archivers, administrative and secretarial staff.

Our staff has a wide experience of working in multi-disciplinary teams on building projects in France, Italy and abroad.

RPBW has successfully undertaken and completed over 140 projects around the world.

Currently, among the main projects in progress are the Paddington Square in London; GES-2 arts centre in Moscow; the CERN Science Gateway Building in Geneva and the Toronto Courthouse.

Major projects already completed include: the Centre Georges Pompidou in Paris; the Menil Collection in Houston, Texas; the Kanak Cultural Center in Nouméa, New Caledonia; the Kansaï International Airport Terminal Building in Osaka; the Beyeler Foundation Museum in Basel; the reconstruction of the Potsdamer Platz area in Berlin; the Rome Auditorium; the New York Times Building in New York; the California Academy of Sciences in San Francisco; the Chicago Art Institute expansion in Chicago, Illinois; The Shard in London; Columbia University’s Manhattanville development project in New York City; the Harvard museums in Cambridge, Massachusetts; the Intesa Sanpaolo office building in Turin, Italy; the Kimbell Art Museum expansion in Texas; the Whitney Museum of American Art in New York; the Valletta City Gate in Malta; the Stavros Niarchos Cultural Center in Athens; the Centro Botín in Santander; the New Paris Courthouse; the Academy Museum of Motion Pictures in Los Angeles and others throughout the world.

Exhibitions of Renzo Piano and RPBW’s works have been held in many cities worldwide, including at the Royal Academy of Arts in London in 2018.

The Fondazione Agnelli is an independent, non-profit research organization in the fields of human and social sciences, established in 1966 and named after founder of Fiat, the Senator Giovanni Agnelli. Its mission is "to further understanding of change in contemporary society in Italy and in Europe". Since 2008 the Fondazione's focus is on education, as a powerful lever for an individual's fulfilment, an important channel of social mobility, and a key factor for a country's economic growth and social cohesiveness. It runs wide-ranging studies to improve the Italian education system, works with schools to renew the teaching methodologies, and helps families in the school choice.
https://www.fondazioneagnelli.it/en/