Beyond electrification, Stellantis is pursuing a broad spectrum of energy carriers and powertrain technologies to address the widest range of mobility requirements. And this includes hydrogen.

Given the profile of our customers, we have designed a mid-power architecture solution which delivers a range of more than 400 kilometers (certification pending) and refueling in just 3 minutes. Hydrogen provides the energy needed for extended driving range, while a medium capacity battery provides the power for dynamic performance in addition to energy recovery and plug-in capability.

To preserve payload capacity, all components of the fuel cell propulsion system are external to the cargo space. The system can also be integrated with our existing battery electric LCV platform, meaning minimum variation and maximum synergies between the full battery-electric and the hydrogen versions.

The mid-size Citroën Jumpy, Peugeot Expert and Opel Vivaro vans were chosen as the launch models for this technology, enabling rapid adaptation of the technology itself and rapid integration with our existing production processes.

These first models, produced at the Opel Special Vehicles facility in Rüsselsheim, Germany, were launched in Europe at the end of 2021.

For development of the two main systems - hydrogen storage and fuel cell stacks - Stellantis worked in strategic partnership with Faurecia and Symbio who have best-in-class capability in these technologies.

What is a fuel cell?

By combining hydrogen and air in the presence of a catalyst, a fuel cell generates electricity to drive an electric motor, with water vapor as the only by-product. So, compared to a battery, a fuel cell is an energy converter rather than a storage device.

At Stellantis, based on customer requirements, we have chosen a mid-power solution.

What are the advantages of our mid-power, plug-in hydrogen fuel cell electric vehicle?

1) It enables smart packaging compared to the full-power system.

Since a mid-power fuel cell is also mid-size, the entire system can be integrated with our existing battery-electric LCV production models. We replaced the traction battery with three storage tanks that provide hydrogen to the fuel cell system.

This converts a battery-electric LCV into a fuel cell electric LCV without modifications to the body, meaning no impact on cargo space or payload. At the same time, the vehicle has a range of more than 400 kilometers based on the WLTP cycle (certification pending).

2) Compared to a range-extender system, there is no compromise in terms of performance.

The fuel cell system is capable of providing enough power for continuous highway speed. When needed, peak power is provided by the battery positioned under the front seats. The battery is a carry-over component from our existing plug-in hybrid electric vehicle program.

3) The battery covers power requirements for acceleration and other functions, as well as start-up and first mile.

This provides better durability than a full-power system by allowing the fuel cell system to run at optimum operating conditions.

In addition, the battery enables regenerative braking - the greatest benefit of hybrid systems. The plug-in capability also allows for the battery to be recharged from an external power source providing pure battery-electric range of 50 km. 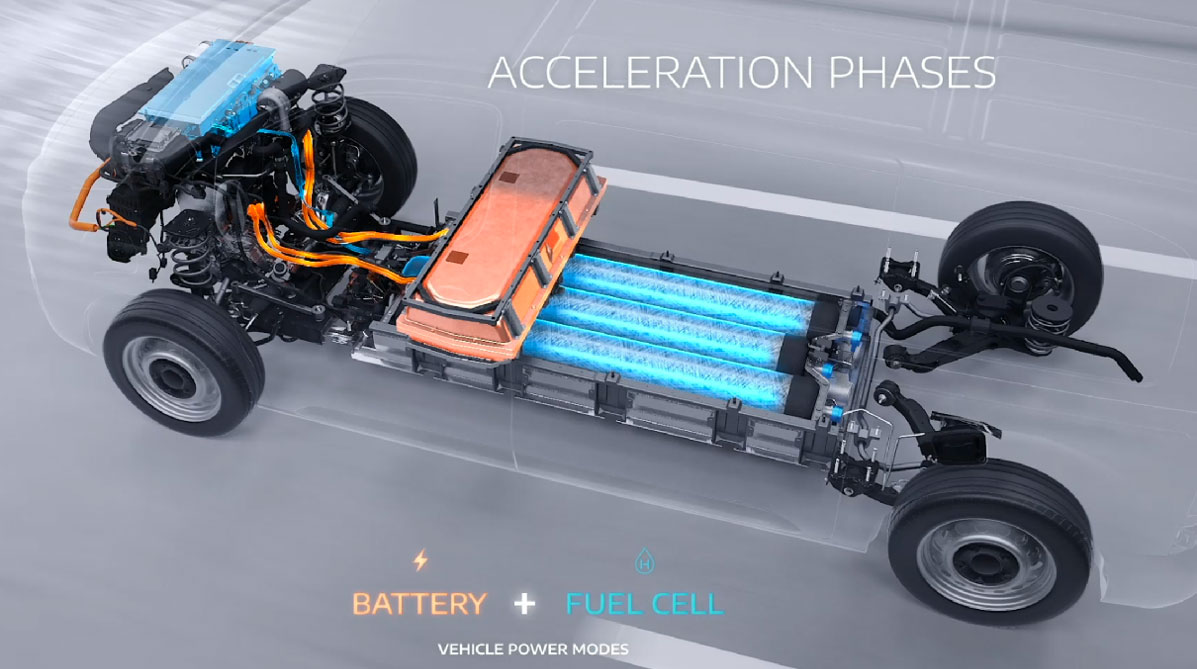